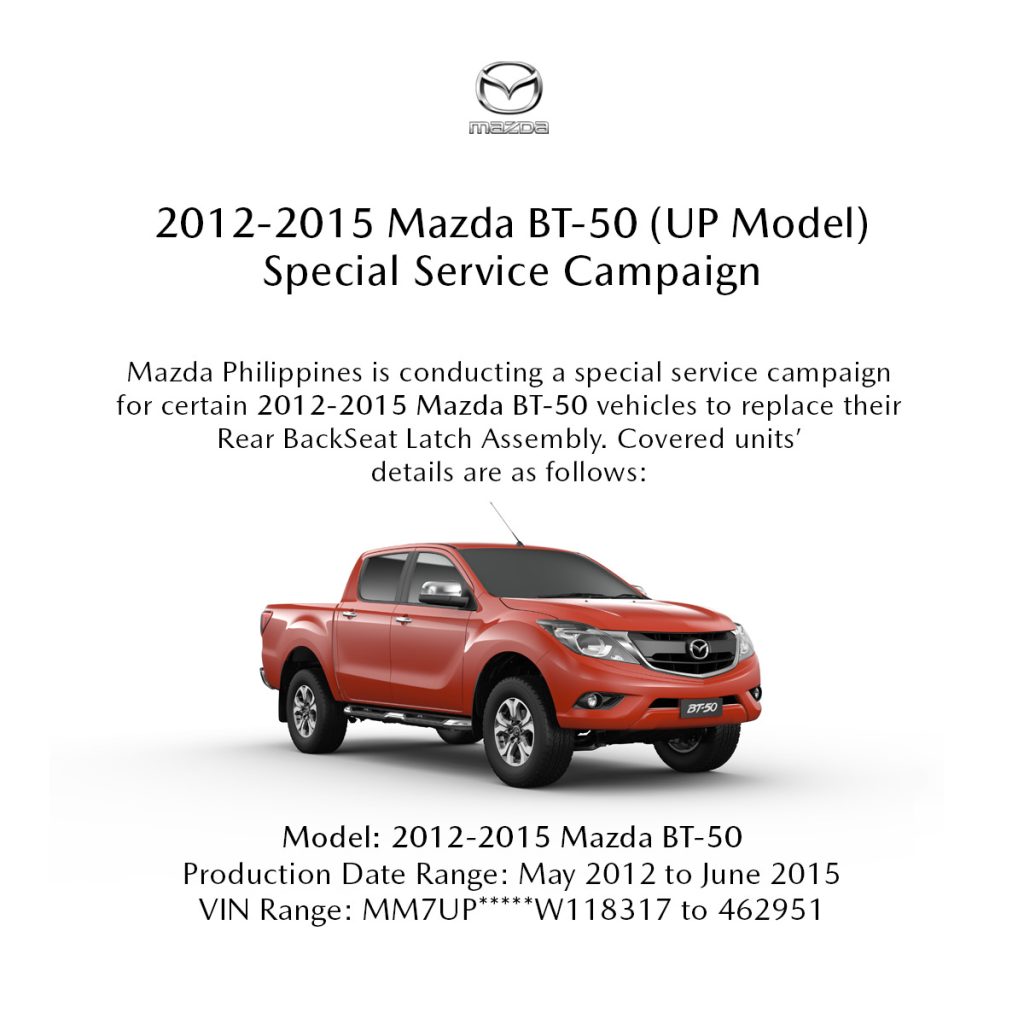 February 14, 2022--Makati City, Philippines. Mazda Philippines is once again calling on owners of 2012 to 2015 Mazda BT-50 pickup trucks to confirm with their Mazda dealer if their vehicle is included in the ongoing Proactive Special Service Campaign that will replace the rear backseat latch of affected vehicles for free.

This campaign was initiated by Mazda Motor Corporation back in 2017 to address the malfunctioning of the lock mechanism which holds the previous generation BT-50’s backseat in an upright and locked position.

Aside from the abnormal noise observed from the backseat of certain units, there is a possibility that the backseat may also fall down when braking. In addition, the clearance between the child-restraint and backseat will also become too narrow when a rear-facing child seat is installed.

Specific Mazda BT-50 pickups with the Vehicle Identification Number (VIN) range from MM7UP*****W118317 to 462951 and built from May 2012 to June 2015 from the Mazda AAT manufacturing plant in Thailand, are included in this campaign. Owners of previous generation BT-50s within this VIN range and model years are requested to confirm whether their vehicle is included in the campaign.

Owners of covered units may book an appointment with their preferred dealer via-https://bit.ly/mazdaspecialservicecampaign. Customers may also directly contact any of the 15 authorized Mazda dealerships to check the inclusion of their BT-50’s VIN and to set an appointment with them for the service. The part replacement will take less than two hours to perform.

“As a demonstration of the brand’s commitment to its customers, Mazda Motor Corporation has been continuously monitoring the safety of its vehicles even years after they were sold,” says Ramil De Vera, General Manager for Customer Service and Aftersales of Mazda Philippines. “Being the exclusive distributors of Mazda vehicles in the country, Mazda Philippines, through our dealerships, has also been reaching out to the owners of the vehicles included in this Proactive Special Service Campaign so that we may assist in ensuring the safe and worry-free use of their Mazda BT-50.”

Special Service Campaigns are part of Mazda Philippines’ commitment to customer satisfaction and safety. Through proactive Customer Service initiatives such as this, Mazda aims to deliver a true premium ownership experience and peace of mind to its customers. This high level of after sales service is also reflected in Mazda Philippines’ number one ranking in the J.D. Power 2019 Philippines Customer Service Index (CSI) StudySM